Generally speaking, when we talk about a TV or film franchise being adapted for some other medium, if that IP doesn’t come from a Galaxy Far, Far Away™, it’s going to be bad. Game tie-ins have a rather long and mostly dubious history beginning back in the 1950’s when game shows started creating ‘Home Versions’ of their show that people could take home and play themselves. This then expanded into applying a popular IP to classic games, with Monopoly, Trivial Pursuit, and Clue being some of the most prominent examples. Most of us have probably sat through a game of Harry Potter Scene It? or Modern Family: The Board Game or Halo Risk or Friends Clue. That last one isn’t an actual game, but you’ve seen enough of these to believe it. You’ll have to just settle for The Big Bang Theory Clue instead, which does.

Once video games started to gain popularity, the video game tie-ins began to happen. The E.T. game for Atari is the stuff of legends now with it being so bad they just threw it away. Nowadays every summer blockbuster gets a video game tie-in, and they are almost universally reviled. This has proven to be such a trend now even a mediocre adaptation is usually enough to generate sufficient sales to parents eager to let their children sate themselves on whatever the new hotness is to justify their budget.

Don’t we all want to play that classic game where Raj murders Sheldon with a dog-eared comic in the laundry room?

Despite my pessimism, there are the occasionally successful licensed adaptations. I will still gladly stop and play my friend’s arcade cabinet version of Turtles in Time, being a passionate TMNT fan. I have fond memories of the Lord of the Rings movie tie-in games from EA for the Playstation 2 more than a few years ago. The LEGO series of games is also one that comes to mind, but that series has more in common with licensed versions of Monopoly than with a traditional adaptation, taking the very successful LEGO engine and pasting all sorts of different themes on it. LucasArts has made a small mint on successful Star Wars licensed products, but they are more the exception than the rule. This certainly doesn’t stop people from trying. There are definitely passionate communities behind some of these products, and if you can do it right, they will reward you.

I think we can learn a lot by trying to consider why so many licensed games fail. One simple answer is that developers often expect that a game with a strong license and current market relevance will sell, even if it’s bad, so it becomes a rushed attempt to maximize profit before their window of excitement closes. It is nearly impossible to succeed if you don’t try, so lets ignore those for now. What about those games that do try? Why do so many of them still fail?

As a quick case study, let’s look at two recent examples from a single, high profile IP, the Aliens franchise – Aliens: Colonial Marines (2013) and Alien: Isolation (2014). Both games were developed by separate development houses but released by Sega. They provide a good contrast between successful and failed licensed games. Colonial Marines was a technical disaster, universally panned and unintentionally hilarious, but it’s failure goes way beyond bad code and goofy character animations.

Get your knees flexin’ and your arms T-Rexin’, and do the Creep.

Alien: Isolation, however, is a fantastic game, critically acclaimed and palpably terrifying. The main difference between the two, aside from a little polishing of code, is the experience players have while playing the game. Alien: Isolation captures the essence of what the Aliens franchise is about: being terrified in the face of the perfect killing machine.   It puts players in that world, not just mechanically but emotionally. If you want to see what a licensed property title can be like done right, go pick this game up from Steam and treat yourself to a few hours in the dark by yourself playing Isolation. There have been many, many attempts to recreate the Aliens experience in video games, and while some of them have not been terrible, Isolation is the first game I have ever played that actually feels like being in an Aliens movie.

Let’s take a look at another massive IP: Star Trek. The Star Trek Universe is abundant with story telling opportunities between mining the existing lore for great content and having such a vast universe capable of encompassing new content. The canon spans decades with compelling settings and conflicts for whichever part of that timeline you happen to enjoy. And there is a committed fan base, eager for good content and willing to pay when they find it. There have been several new fan film projects recently that prove this to be true.

To boldly go where no collector has gone before…

There are dozens of licensed Star Trek games, both board games and digital games. A brief browsing through Wikipedia in the board game space shows a pattern typical of many popular licensed properties: The Cash Grab.

There have also been some attempts to develop serious board games using the Star Trek IP, but most have flopped. There’ve been multiple attempts to build a collectable card game using this license. All have since been discontinued. There was a game called Star Trek: Expeditions designed by acclaimed designer Reiner Knizia (who has designed a number of very popular and well-designed board games) where players assume the role of cast members from the 2009 film. It received middling reviews and has since mostly faded from discussion. There is a miniatures game called Star Trek: Attack Wing, the inferior cousin to a similar Star Wars game, which is producing expansions at a prodigious rate and seems to remain fueled mostly by the collectability of the models rather than the gameplay. My personal favorite, a game called Star Trek: Fleet Captains, gives a fairly time consuming but immersive experience achieved through a tremendous amount of complexity and poorly written rules with players controlling an entire faction, such as the Federation or Romulans, in a game of exploration and conquest. Even that game is much more of a niche offering and is hard to find now.

The video game side of things doesn’t fare much better. With the exception of Star Trek Online (released in 2010), which saw modest success, before going free-to-play, changed the dynamic of the game, there hasn’t been a good Star Trek video game since maybe 2000. There have been several games released as tie-ins to the new movies as Cash Grab titles, which have almost universally flopped. My favorite Star Trek game is an older title called Birth of the Federation, a classic 4X-style game from 1997 that inevitably bogged down into micromanagement late in the game, but I have spent many enjoyable LAN play sessions with friends over the years, and still have a copy of the game fondly on my game shelf.

Why aren’t they more successful? In some cases, the quality is just inferior, but people buy it anyway because they are fans or collectors (because I gotta have at least one copy of Monopoly, so it might as well be the Collectors Edition Star Wars Episode I Monopoly. It was a gift…). In other cases, the usage of the license makes no sense. At this past GenCon, I had a chance to demo a board game using the Top Gun license which had me initially incredibly excited… only to be massively disappointed in discovering it was a weak party game that mainly involved reading movie quotes from cards. Few things generate as much vitriol as butchering a popular license, which is one of the reasons I think publishers are less prone to take the risk. The Internet can be a scary place for people who make bad games.

In most cases, especially with the more serious attempts, they fail because the creators of the licensed product don’t understand or fail to capture what draws us to that content in the first place. We will come for the license, but only stay for the feeling. This is one thing that the Star Wars IP does so well. Want to feel what it’s like to fly an X-Wing? They have you covered. Want to feel what it’s like to engage in lightsaber duels and crush your enemies with the force? Covered as well. But what does it feel like to do something Star Trek-y? It’s much harder to define, and probably different for each person, which is why capturing that experience is so much harder. It’s one reason I think the Bridge Simulator game Artemis is the best Star Trek game that exists right now, despite not actually being a Star Trek game. Artemis captures what it feels like to work as a crew, to solve problems together, and to recreate the best aspects of that collective experience.

A glimpse at some of the different stations in Artemis.

To make a truly great licensed game, you have to tap into what makes that license special.  It’s a lot harder to get right than it seems.  In my next post, I’ll take a look at some examples of licensed games done correctly, and some keys to their success.

Got an example of a licensed game that really hit home for you?  Let me know in the comments below. 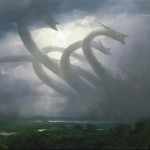 Husband and Father of Two. Computer nerd by day, Board Gamer by night. Sucker for Bad Movies and anything Green Lantern related (not a mutually exclusive pairing).