This past weekend Batman v Superman: Dawn of Justice premiered to record world-wide box office sales and while I have not yet seen the flick, I can assure you that I’ll be rooting for the Man of Steel. His shield logo is one of the most recognizable symbols in the world and the Metropolis Marvel has set the standard for costumed characters for almost 80 years.  First appearing in Action Comics #1 back in 1938, generations of readers have seen different incarnations of the Big Blue Boy Scout make the journey as a baby from Krypton to Smallville and as a man from Smallville to Metropolis. Last week Derreck brought you his top versions of the Dark Knight Detective while today I bring you my favorite versions of the Last Son of Krypton.

What is my criteria for the order in which I rank these? Personal preference. I claim no sophisticated system. I simply am going to go with what is in my heart. I figure that is what Superman would do.

The creators of this movie decided to base it in the same world as the Christopher Reeve flicks while pretending that neither Superman III or IV had ever happened (that part was a wise choice in my opinion). Routh was cast to a large degree due to the resemblance he had to Reeve as much as his resemblance to Superman. The issue for me was that having it be a sequel just made it confusing and sad. He left Earth, Lois moved on, gave birth to his son, got a husband, won a Pulitzer and got 15 years younger. Routh and his co-star Kate Bosworth (Lois) just seemed too young physically and too old spiritually for this movie to be cohesive for me. This movie just drained me and I have never watched it a second time. I have enjoyed Routh in his role as Ray Palmer on Arrow and DC’s Legends of Tomorrow far more than I did as Superman.

This was the first version of Superman that I remember seeing on television. The character was voiced by Danny Dark in basically the same show with different names from before I started kindergarten until after I started high school. My primary issue with the Superman in Super Friends is that to keep the show kid friendly he couldn’t punch anyone. At all. They decided to deal with this by putting force fields everywhere and then Superman would spend 15 minutes slamming into them. Also Kryptonite made up nearly 1/4th of the world’s crust in the Super Friends universe. Still, I was a kid and I ate it up.

#08 Henry Cavill in Man of Steel

I know that this ranking here will cause some controversy because people are so divided on this movie. I actually agree with much of the criticism on this picture but I honestly think it could have been worse without Henry Cavill. My main issue with this movie was the characterization of Jonathan Kent more than anything else. I actually felt that Cavill tried to offer some heart to the role and there are some scenes he has with Amy Adams and with Diane Lane that are really strong. There are a lot of things that I would have done differently with this film but I don’t think casting Cavill was the issue.

#07 Vin Diesel in The Iron Giant

Okay, I know I’m cheating here but it is my list and I don’t care. The Iron Giant features many of the same plot points as a Superman show – super-powered alien comes to Earth and ends up falling in love with and defending his adopted home and family. The Iron Giant takes some time to figure out his role and Hogarth is in a sense his Obi-Wan, teaching him the meaning of a hero…showing the giant that he is more than just his programming. I am not ashamed to admit that the end of this movie gets me every time. When the Iron Giant closes his eyes and says “Soo-per-man”, it is over for me.  Not one of the other movies on this list makes me tear up like I do every time at the end of The Iron Giant.

A lot of folks would put Welling higher on this list and I probably would have as well if I had stuck with this series. The show suffered for me from ‘freak of the week’ syndrome. Each week someone would get powers from Kryptonite (except Lana Lang who wore a Kryptonite pendant). After a while I left the show so I missed Supergirl, Lois and an early version of the Justice League. I guess I can still go out there and watch them but I haven’t found the time or motivation yet. Obviously the show found a great following, as superhero shows don’t generally stay on the air for 10 years. I also have a hard time accepting Welling as a nerdy high school freshman when the show premiered since he was actually 24 and a model.

#05 George Reeves from Adventures of Superman

For my father’s generation George Reeves was Superman. Reeves was reluctant to take on the crimson cape and a television series as he was worried about how it would affect his movie career. In that sense he was probably correct in that the show made him a household icon and ‘the’ face of Superman for a couple of decades. Reeves’ Superman is older and more sure of himself and his Clark Kent is as well. This Clark pretty much relied on the hat and glasses to do the disguise work rather than any other characterization. Physically, George isn’t a guy that you would cast as Superman today but he isn’t far off of the Superman that we saw in the comics in the forties and fifties. We also didn’t see any angsty business with Superman getting all misty about being an alien. This Superman knew that being Superman is awesome so stop moping and fight some bad guys!

#04 Dean Cain in Lois and Clark: The New Adventures of Superman

Cain’s version of the Metropolis Marvel borrowed a lot from the Modern Era of Superman started by writer/artist John Byrne. Clark’s parents are both alive in this show and I think the way that they are a part of his life is a very big reason that I enjoyed it so much. I always felt that the Kents are the main reason that Superman is who he is. Their acceptance and adoption of this visitor from another world is what fuels the character’s fundamental characteristics of hope and selflessness. Cain’s Clark Kent was opposite Teri Hatcher’s Lois Lane and their chemistry really came through. I really liked Clark and Lois married both in the comics and on TV.  To my knowledge, this is the only version in television or in movies where they tied the knot.

The Fleisher cartoons still stand the test of time in my opinion. These short features were shown in front of movies (whereas now we get advertisements) and for millions of people this was their first introduction to the character particularly overseas. One of the first episodes “The Mad Scientist” cost $50,000 to produce in 1941! The great sci-fi themes, the musical score, and the physical sense of Superman’s strength still get me going. I probably shouldn’t give Collyer too much credit here as the animation is really the star. In fact, Collyer doesn’t even speak much as Superman. By far most of his dialogue is as Clark Kent which he does as very mousy and high pitched. Lois is as intrepid as ever here although she does need Superman to bail her out frequently. You also have this series to thank for ‘faster than a speeding bullet’.

Producer Bruce Timm had a great feel for what people wanted to see in his animated series. Superman here is confident and heroic with a much brighter tone than the excellent Batman animated series that preceded this one. The series showed us a Superman generally supported by the community and while he had super-strength, he had to strain to move large objects like trucks or ships. Unlike on the Super Friends, Superman didn’t push the Earth around to find his lost keys or make it become Friday sooner. The show had a rich cast of fleshed-out other characters and some great villains. This show also remembered (sometimes) that Superman had super-speed. In one episode, a guy was pointing a kryptonite ray gun at Supes and he was half way through gloating over the ‘alien’ he was going to shoot when Superman disappeared and then reappeared with the gun. Super-speed is seriously a great power. You could probably make a whole show about a guy that had super-speed as his only power. Maybe.

#01 Christopher Reeve from Superman: The Movie and Superman II

Christopher Reeve will always be Superman for me. The way he carried himself as the Last Son of Krypton and the way that he took on a completely different appearance, posture, and tone as Clark Kent was a perfect reflection of the Bronze Age character. This Superman was noble and optimistic. He chose to see the best in people and always encouraged them to do the right thing before just throwing a punch. Reeve’s Superman was about inspiring people to do the right thing and not just inflicting justice on wrongdoers. Superman: The Movie is absolutely not a perfect movie. The Lois Lane voice over in the flying scene makes me cringe every single time. So much more was right though – the relationship between Clark and Pa Kent, catching Lois and the helicopter, using his own body as a missing train rail. Those were some of the best cinematic moments I have ever experienced. The 2nd movie had hiccups as well but I liked that Superman used his brains to defeat the Phantom Zone villains and didn’t just rely on punching them. Anticlimatic? Perhaps, but appropriate nevertheless. He also ‘runs away’ from the bad guys so that instead of duking it out in Metropolis he takes the showdown to an unpopulated area. Crazy, crazy idea. I believe that Reeve’s later paralysis hit people so hard because people really thought of him as Superman. Reeve continued to inspire us after the cameras stopped rolling as as he did during. 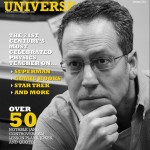 John is one of the founders and hosts of The Worst Comic Podcast EVER. Besides writing and talking about comics he can be found at his day job teaching physics. Frequently his physics lessons involve super-heroes. Go figure.

One comment on “Top 10 Superman Incarnations in Film and TV”