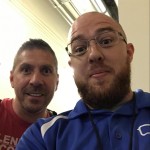 Iggy Michniacki is the Founder & CEO of Project-Nerd Publishing (pnpublishing.com). He also is writing three ongoing series and a graphic novel for the new independent comic publisher. Prior to his current role within the comic industry, Iggy founded and contributed to the Project-Nerd brand including a well known and highly visited geek blog that shared opinion pieces, reviews, and other fun articles.

The Grid Daily continues to show its support for all things geeky and cool. That’s why we’re honored to have our new western comic, Billie, featured right here.

Billie, launched on Kickstarter October 12, 2016, and hasn’t looked back. The graphic novel follows Billie, a young woman who saw her parents murdered right in front of her eyes outside Dodge City as a child. Her neighbor, Victor, took her in and taught her how to stand on her own. Now she’s joined by her new friends, Jayne and Gordon, taking on the Drask Gang down in the New Mexico border towns.

It’s always been a dream of mine to write comics and here I am doing it. After founding Project-Nerd more than four years ago, I finally built up the courage to launch Project-Nerd Publishing. We have met so many amazing publishers, creators, artists, writers, and industry insiders that pushed us and taught us. Project-Nerd Publishing became a reality and one year later; my first solo writing project is here, and receiving great feedback.

Billie is a character who has been growing on paper for more than five years. She’s a character that sets the record straight and exhibits how not all cowboys were white men. Billie, Jayne, and Gordon all break the stereotype of what you see in comics and popular western media while Drask and his team, will define a new era of western gangs.

The 60-page story is a complete arc featuring Billie’s arrival in Aspen, New Mexico and kickoff the new war that will wage between her and Drask. It’s a story that’s been reviewed and praised by anyone who can get their hands on it. And it still has plenty to offer in follow up graphic novels.

As much as Billie means to me and was born from my mind, the team isn’t just me. I am joined by a pair of artists who are unmatched. Zack Rezendes is handling the pencils and inks. He has an amazing ability to take my script and transform it into the images I had in my head. The look he gave the main characters is exactly what I was expecting and his artistic style lends incredibly well to the story we are telling.

Once Zack finishes the inks, Michaela Patton comes in and handles color. Her abilities are only matched by her desire to get it right, spending time researching the era, adjusting colors to fit the scene, and keeping a consistent color palette throughout.

The team is truly fantastic and deserves the recognition for helping this dream come true.

Billie is written and lettered by Iggy Michniacki, with pencils and inks by Zack Rezendes, and color by Michaela Patton.

Welcome to 2016. A year that feels as if it has been written by some of the greatest and most disliked fiction writers of our time.

If you haven’t been paying attention, 2016 has taken some of our most beloved media treasures from us. It has given us countless important news stories and opportunities that have been ignored by the media while they further drive their agendas on top of a division between classes and race. The year is actually giving us an election that features a billionaire evil villain against an emotionless un-convicted criminal that everybody seems to be settling with. We even have killer (maybe) clowns roaming the streets all across the country. And of course, an unlikely hero in a gorilla named Harambe who, well, really did nothing but die to earn this awkward heroic status.

When Nick Diener tweeted this is the year we desperately need Batman, he wasn’t lying:

So, as like in every election year, 2016 presents us everything as either Side-A or Side-B, black or white, 0 or 1, gorilla or no gorilla. And if you’re getting ahead of me and starting to guess where I’m going with this article, I’m going to have to ask you to take a step back and not assume my gender… I mean direction.

My point? With all of this pick-a-side controversy, why is a community that once stood so firm together now arguing over whose fandom is better?

For me, I’ve made no secrets in my fandom choices. Although I’ll take an independent or small press comic over the big  guys any day, Batman has always been my hero of choice. Alan Moore could not, and probably still cannot, write no wrong, DC or Marvel, the book over the movie when it came to A History of Violence, and the movie over the book when it comes to The Hitchhiker’s Guide to the Galaxy, and so forth and so forth.

But before I carry on sharing my opinion, I am certain many of you reading this are ready to tell me that you disagree and more importantly the very reasons why.

But what makes my fandoms superior in my mind are the very same things that make your fandoms superior in yours. Mostly, it’s what we were raised on or maybe it was how we experienced it for the first or best time. Having a friend pop your Doctor Who cherry is amazing, no matter if it was decades ago or more recently when the ever-popular David Tennant was caught up in that wibbily-wobbly timey-wimey ball of a series.

Most of all, our fandoms are our favorites because they are what helps us escape some realities and have allowed us to unite with others that have a deep love for something. Why do we turn to science fiction? Because even the grimmest of tales is less scary then what is really happening to the planet. Why do we continue to watch that same series over and over again? Most likely because you’re introducing it to a new friend the same way you were, or you’re sharing it over and over again with somebody important in your life.

But escaping in fandom doesn’t mean we’re running away from our problems. It doesn’t mean we’ve buried our head in the sand and pretended nothing is happening. In fact, the nerds and geeks of the world are the ones that have been saving it for generations, the ones that have given us not only all these fandoms, but all these technological channels to enjoy them. But as we try to share our enjoyment, or even sometimes our dislike, as geekdom grows so does the chance for an argument. The arguments grow louder and louder and a once united front of individuals that so often stood on the outside looking in now stand divided even though we hold the key to the entertainment universe. We quit introducing our friends to a fandom in such an intimate way and now just enjoy these things alone and share our strong willed opinions over the internet.

Let’s stop arguing about David Tennant or Matt Smith. Let’s stop arguing about DC Expanded Universe vs the Marvel Cinematic Universe. Rather, let’s rejoice in the fact that Doctor Who came back and has given us four amazing and different actors to portray the lovable Time Lord. Let’s be pleased in the fact we have comic book movies coming out every quarter, if not more frequently. Let’s not complain about race when watching an amazing series Netflix recently released.

Who cares if you know Jessica Jones and Luke Cage eventually get to the baby making stage of the relationship or not. Let’s welcome our different opinions and new members of the nerd alliance with open arms.

More importantly, let’s enjoy those now argument free times with loved ones, whether new or old. Let’s introduce a new generation to Wolverine, even if only through Hugh Jackman’s portrayal. Let’s walk away from something and appreciate the fact it was there giving us time away from this crazy world and a short window of time shared with somebody we care about.

In fact, next time somebody speaks positively about a fandom you dislike, why don’t you enjoy the fact that there are so many geeky things out there for people to enjoy that there’s no way every individual will like every single one.

Let’s stop fighting over trivial geeky things. Besides, we have more important things to argue about…. You know, like what’s for dinner?